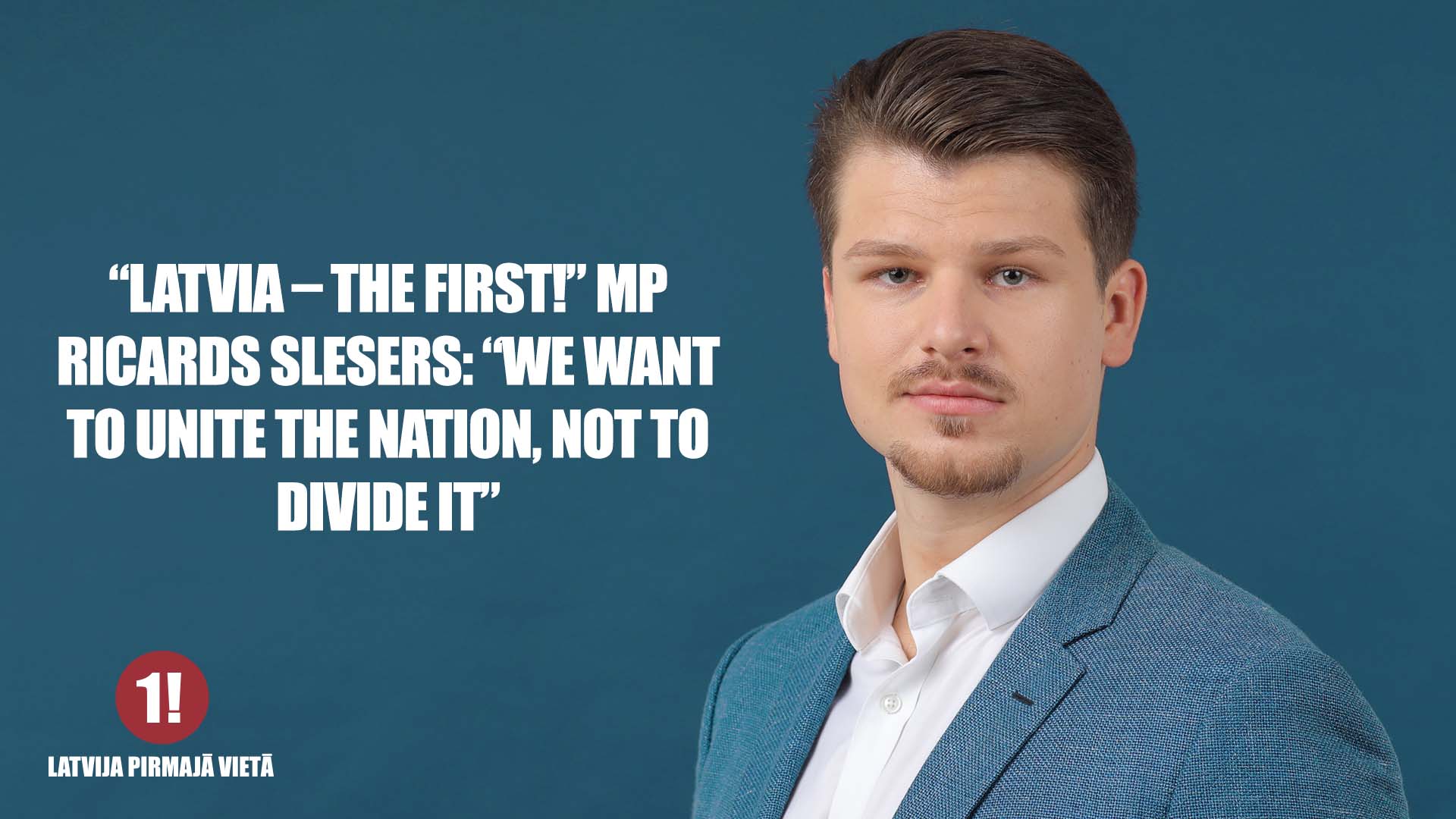 Ricards Slesers, a Latvian parliamentarian of a nationalistically-inclined party, “Latvija Pirmaja Vieta” (“Latvia – the first!”), in the country’s legislature, the Saeimas, in 2022-2026, told The Baltic Times Magazine he is “proud” of coming from the well-known Latvian family, the Slesers. His businessman father Ainars has been a minister and continues to legislate in the Saeimas in the party he established, the mentioned “Latvia – the first!”. “He is definitely a role model for me in regards to his moral principles, Christian values, pioneering businesses, and his achievements. His interests, the same as mine, are for the benefit of Latvia. I wish there were more personalities like him in Latvia,” the son, Ricards Slesers, said.

How did you, a TV producer and director, become a politician? And why did you pick “Latvija Pirmaja Vieta” (“Latvia – the first!”), a nationalistically-inclined party?

First of all, I am a citizen of Latvia and I care deeply for our country’s future and wellbeing. As you know, the Members of Parliament are elected by people and the diversity of elected members with different professions only shows that our people want to be represented by a person they can trust and rely on. Although my political career has just begun, my career trajectory was originally set for the film Industry.  My pursuit of an education led me to the UK for 6 years, during that period I finished high school and obtained a Bachelor of Science degree in “Film Technology and Visual Effects.” After working on film sets in Ireland and South Africa, I returned home to witness the inner workings of the film industry in Latvia. A realisation was made, Latvia has the potential to have a strong and thriving film industry. Latvia not only has stunning diverse locations, but also a high end virtual production studio alongside a motion capture studio (just to name a couple of aspects of what the Latvian film industry has to offer). Latvia is prepared to accommodate high budget productions but the only factor that limits the growth of the industry is the Latvian film tax incentive. Unlike Lithuania and Estonia, where the tax incentives are up to 30 percent, Latvia’s tax incentive program offers up to 20 percent in cash rebates. In order for Latvia to compete with other nations’ film industries, the tax incentives need to be raised to at least 30 percent This is partly the reason I am pursuing politics, so that the Latvian film industry can have a brighter future. My role model in life, politics and business, has always been my father, Ainars Slesers.  Therefore, it is safe to say that he inspired me to go into politics and fight for my ideals, and for my goals.  The party “Latvija Pirmaja Vieta” (“Latvia – the first!”), whose founder is my father, has exactly such programmatic goals, which are also essential for me as a person.  I wish that the youth of Latvia do not leave, that Latvia does not continue to decline in population, that there are strong and big families in our country.  Our party, according to its political orientation, is conservative in matters of values, and at the same time we stand for the unification of the entire Latvian population, regardless of the nationalities that live here.  This is the only way our country will be strong and able to overcome these difficult times.

Are you nationalist? In what way? What are the boundaries for you of “healthy nationalism”?

I do not understand why you associate our political power with the term nationalist?

Yes, we are nationalistic on matters affecting the national language, which cannot be debated.  It is exclusively the Latvian language.  But historically, different nationalities have lived in the country of Latvia and this is a blessing, not a deficiency or a problem.  We want to unite the nation, as I mentioned earlier, and not to divide it according to national characteristics.  Unfortunately, since independence, the nation has been divided rather than united. Obviously, the bi-communal state has been very beneficial for someone.

What do you want to achieve in the Saeima? What are the key goals of “Latvija Pirmaja Vieta” (“Latvia – the first!”). Being in opposition, your impact will be limited, will it not?

Although we are in opposition, we do stand up for the ideals and goals of our party.  We will be in constructive opposition, and if we see that the position is advancing laws that we support, then we will support them, no matter how unpopular they are.  At the moment, the most important thing is to get the country out of recession and a real crisis – both economic and humanitarian, which was also greatly affected by the two years of the pandemic.  First of all, I will stand up for the interests of young people, for educational opportunities and quality, for “first job” opportunities, I want to stop the departure of young people from Latvia. In addition, I want Latvia to become a hotspot for foreign film productions, this can be accomplished by increasing the film tax incentive to at least 30%. One of the examples of what I will fight for: for a young person to be exempted from paying taxes which are deducted from their salary in their first job in their first year of work.  This would be a great motivation for young people not to leave Latvia immediately after school and, accordingly, for employers to hire young people.

Why did formation of a new Latvian Cabinet take so long? What were the biggest disagreements among the possible Coalition partners?

Our party did not participate in the coalition negotiations, so we did not have detailed information about what was happening behind closed doors for more than two months.  We were looking from the outside, while “Jauna Vienotiba” (“New Unity”), “Nacionala Apvieniba” (“National Alliance”) and “Apvienotais Saraksts” (“United List”) were not able to come to a common denominator. Even with their Coalition agreement signed, they will continue to fight for who will have a greater number of ministers, as well as for the need for a new ministry and its fellow ministers. Meanwhile, the people of Latvia are forced to wait for the good changes they were promised.  That is also why the extra positions of ministers were created, which is not acceptable and supportable for our party.  At a time when the state administration should be reduced, money should be saved, the number of civil servants is being increased and another new ministry will be formed, which we think is unacceptable and we do not support it.  Let’s see how this government will do at work.

Latvian political scientist and historian, Gatis Kurmins, says Krisjans Karins could have the longest and the shortest government under his auspices. Do you agree?

I would not like to engage in speculations about the longevity of the Kariņs government, but one thing is clear – the presidential elections, which are expected in June, will be a big test. There, the parties in power will have to clearly position themselves in support of a candidate.  At the moment, it is clear that current President Egils Levits is supported only by “New Unity.”

The pro-Russian party Harmony (“Saskana”) was dealt a blow in the election – it did not overcome the 5 percent parliamentary barrier. What are the reason behind the failure?

You see, it is difficult to judge the mistakes of other parties without being in those parties and not knowing all the circumstances of the case.  “Saskaņa” has been in several convocations of the Saeima as the most numerous political force, but has never been in power.  This is a certain paradox, which certainly affected the mood of the “Saskaņa” voter in these elections.  Simply put, their electorate is tired of the fact that “Saskaņa” never enters the government.  Likewise, the war in Ukraine split the votes of Russian-speaking voters to a great extent.  The more radical ones voted for “Stabilitate” (“Stability”), while the rest split and voted for other parties, including ours.  We have never hidden the fact that the Russian-speaking electorate is very important to us.

What social and socioeconomic issues seem to you especially acute for the new Cabinet?

Our program is very clear on that. The social disparities in Latvia are unacceptable. It has to be changed. To have a future, Latvia needs people – children to be born, families to stay, not migrate away in search for a better life and again, Latvia has one of the worst demographics in the EU. We need an effective policy to support our people. families and motivate those who left to return. Last but not least, there is an urgent need to ease bureaucracy and tax burdens on businesses. The people – businesses are the ones that generate income and wealth for Latvia. But the most important thing right now is to provide support to the people of our country so that they can pay for energy resources this winter.

In general, what are you missing in Latvian politics?

I would like there to be numerous and truly strong parties that operate in the long term in Latvia’s politics, which lacks dialogue-oriented communication with its citizens.  Our party, since the day of its foundation, has not lost bilateral communication with its voters and we want to continue this dialogue even when we find ourselves in opposition. It’s time for change and it will start with us! We are already preparing for the next European Parliament and municipal elections.